STUNT MOVES FOR YOUR SANITY

That was the harsh realization of what I did. The vehicle’s dashboard display, which dutifully shows my temperature controls, my pre-programmed entertainment choices and of course my Bluetooth-connected device, had communicated the horror. The display read, “No Phone Connected.”

I didn’t do it on purpose, clearly. No one deliberately severs their electronic umbilical cord like that. With a blunt tool. In an unsterile environment. On a Tuesday. This wasn’t even a blatant case of the Mondays. Oh no. The stars were obviously conspiring against me.

I was halfway between my home and the office. You know, that highway-purgatory point of no return?

In my head, I yanked the wheel 180-degrees stopping the northbound morning commuters in true Hollywood stunt-style, hopped the median and zoomed off southward with a cloud of dust and skid marks behind me back toward my little Kendall hamlet. (As if my humble Explorer could accomplish such a feat!)

That was in my head.

In reality, I just groaned miserably at the fear of being disconnected for an ENTIRE day and grudgingly proceeded onward. Would it be too much if the visual included that slo-mo effect inside the vehicle, head whirling, with all of the cars zooming past me outside my SUV at lightspeed while leaving light trails behind them? Good, you got it.

How was I going to survive not hearing that ping of surely-important interoffice memos?

What if I missed a CodeRed, an Amber Alert or the universe arbitrarily imploded, yet we still had cell service?

How would I endure without an hourly FB newsfeed check? I must know what my 458 “friends” are having for lunch (not really); I neeeeeeded to see the latest funny cat videos (c’mon those are hilarious); and I just adore the puppy/baby/baby and puppy pics (if you don’t, you’re soul-less) …. [Sigh.]

Admittedly, I hyperventilated just a little and my psyche scolded me for being irrational.

Then, suddenly … through the fear… I felt a calming wave of freedom. I almost felt guilty. I may have even chuckled sinisterly out loud.

If Addison calls with a bruised knee from tripping up the stairs again (yes, the apple doesn’t fall far)… I wouldn’t have to rush away from work to her rescue and figure out how to make up the time later. I wouldn’t have to bandage an injured ego either.

If that friend texts, saying “call me when you can” and you know she only wants to playground-gossip about the other school moms or worse, con me into baking something for the bake sale…. Ooops, didn’t get the text. (Shrugging.)

If Roger texts, reminding me that I left my coffee cup in the sink (so?) or I tracked mud in the house from walking the dogs (at least I walked ‘em!) or whatever else I did/didn’t do that day…. Nanny nanny boo boo, I didn’t hear you. (Eyes clinched, fingers in my ears.)

OK, the last one was a little childish, but not far from the truth. (He’s such a neat freak.)

Is guilt the right word? Maybe weightless… like some distant galactic deity that figuratively lifts the world from Atlas’ shoulders. Yup. That’s what it felt like.

Would I be more focused? Maybe. Well, after the initial twitching and thumb-shaking wore off from the withdrawals.

I found I had TIME. I was clear-headed. I was checking things off This to-do list and That to-do list. Sound the bugle horn, ladies, and let me stand with my chest puffed and fists on my hips. I am Wonder Woman!

Phew. I’m exhausted, but in a good way.

Moral of the story? Yeah, I should have one of those. One word.

It’s healthy. It’s needed. And dare I say, you deserve it.
It’s okayyyyyy to disconnect.

Maybe later though. You’ve still got emails to read, agendas to file and memos to write. And, your kid just called.

The flywheel is a mechanical wheel that, once jumpstarted and if it continues to turn long enough and at a fast enough pace, will eventually get to a point of breakthrough.  The flywheel will then begin to move under the weight of its own momentum.  Great teams understand and implement the flywheel concept, as presented in Jim Collins’ book, “Good to Great”.  Watch this short video to challenge you, as a leader, on how you will keep your team’s momentum pushing on your flywheel to success!

Good to Great: Why Some Companies Make the Leap… and Others Don’t 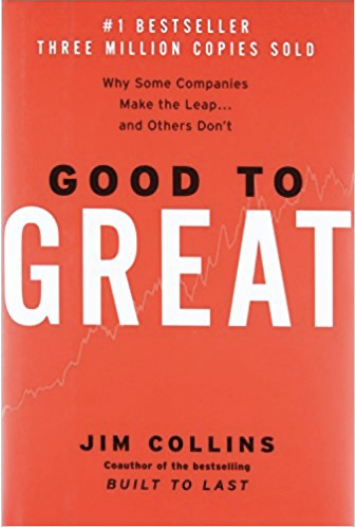 In Good to Great, Jim Collins discusses the attributes that allow only a few companies to make the transition from good to truly great. “Great” is operationally defined by various metrics, including above average financial performance over a sustained period of time. Collins presents the defining characteristics that differentiated these “great” organizations from the rest.

Throughout the book, Collins reviews several management, personnel, and operational practices, behaviors, and attitudes that are both effective and unproductive to the good-to-great transition.

Each month, we will present information and recommendations that could effectively enhance your way of thinking, behaving, and feeling.

Most of us know that a balanced diet is important because your organs and tissues need proper nutrition to work effectively. Without good nutrition, your body is more prone to disease, infection, fatigue, and poor performance. The Center for Science in the Public Interest reports that 4 of the top 10 leading causes of death in the United States are directly influenced by diet. Healthy eating can reduce the risk of chronic illness and disease, including the three leading causes of death: heart disease, cancer and stroke.

People often associate nutrition with weight maintenance, but eating well is just as important for nourishing the brain. Increasing your intake of the following nutrients may help to improve brain health and overall productivity levels:

Good nutrition really is about balance, like in all areas in our busy lives. Being aware and knowledgeable is the key! So still feel free to enjoy your green beer this March…of course in moderation with a balanced diet!

For more statistics and facts:

Stay connected with news and updates!

Join our mailing list to receive the latest news and updates from our team.Don't worry, your information will not be shared.

We hate SPAM. We will never sell your information, for any reason.